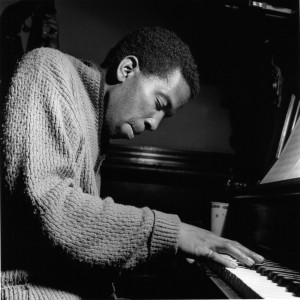 At CAM Raleigh’s kissa night this Monday, June 15, I’ll be playing the swinging blues of the great jazz pianist Sonny Clark, tracks featuring him as a leader and sideman, 1955-1962.  It’s Week 2 of an exciting collaboration between CAM Raleigh and Rock Fish Stew that will extend through the end of the year.

Something about Clark’s buoyant blues struck a chord with the post-War youth in Japan, making his records more popular there today than in his home country.  In the winter 2011-12 issue of Tin House magazine I wrote a piece on Clark in which the novelist Haruki Murakami talked about Clark’s music and the rise of Japan’s “jazz kissas” of the 1960s:

“The popularity of (Clark’s 1958 album) Cool Struttin’ was not driven by professional critics or by sales,” Murakami wrote me by e-mail, “but instead by youths who didn’t have enough money to buy vinyl records, so they went to (the kissas) to hear jazz on the house record player. This was a phenomenon particular to Japan, or at last very different from America.”

Locals, if you have Cool Struttin’ or any of Clark’s records on vinyl, please bring them on Monday night.  I’m particularly interested in the quartets with Grant Green (Clark’s solo on “It Ain’t Necessarily So” kills), or the quartet with Buddy DeFranco that includes the track “You Go to My Head” (Clark’s solo/dialogue with DeFranco at 4:04 kills).  If you have Lawrence Marable’s /James Clay’s 1956 LP “Tenorman” (“Three Fingers North” was written by Clark) I’ll pay for your gas to bring it to CAM.

I’d be a happy fellow to see those rare vinyl LP’s featuring Clark on Monday night.  But anything else would be great to share, too.  I have a few pieces of Clark vinyl, but mostly CD’s, from which we will happily crank many tracks.