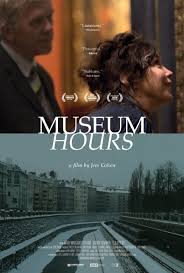 At Rock Fish Stew we’re inspired by the work of filmmaker Jem Cohen.  Lately we’ve been studying his 2013 work, Museum Hours, which tells a story set in contemporary Vienna, mostly in that city’s Kunsthistorisches Museum, particularly in the room devoted to the 16th century paintings of Pieter Bruegel.  The film’s main characters are a Canadian visitor to the museum, Anne, and a security guard there, Johann.  Much of the film consists simply of their ongoing conversation.  Another feature is the surrounding city, but not the parts frequented by tourists.  So the five main elements you see in Museum Hours are Anne, Johann, the museum, Bruegel’s paintings, and the city, interwoven by Cohen’s poetic sensibility.

I bought the DVD of Museum Hours last week.  The accompanying booklet is compelling.  One essay is by Luc Sante and the other by Cohen.  Here is a paragraph by Sante:

“So Bruegel’s works could be said to be museums within a museum, and the movie itself adds yet a third layer of passionate accrual.  Because one of Cohen’s main points is that a museum, especially one with the depth of the Kunsthistorisches, is a living place – not simply a pileup of dead trophies (although that aspect is not neglected) but a fully inhabited collective public space in which the present keeps faith with all that has come before it.  The faces and behaviors you see on the street were already accounted for and recorded centuries ago – the forbidding term “masterpieces” too often stands in the way of works’ immediacy.  And a city itself a museum in its accumulated layers of time, it’s recurrent patterns, its legends and rituals – even its trash, which fully finds expression in the flea market, a museum of dispersal and flux.  And then the immigrant cafe near the Josefstadt tram stop is a museum of its clientele, their snapshots and mementos and empty Jagermeister bottles.  Those accumulations help reinforce its community, to be sure, but it also welcomes in strays, who are tacitly invited to add their own notch.”

“I began to recognize something I’d felt over many years of shooting documentary street footage.  On the street, if there even is such a thing as foreground and background, they are constantly shifting places.  Anything can rise to prominence and suddenly disappear:  light, the shape of a building, an argument, a rainstorm, the sound of coughing, sparrows…(And it isn’t limited to the physical.  The street is also made up of history, folklore, politics, economics, and a thousand fragmented narratives).”

Toward the end of Sante’s piece, he writes:  “Cinema is (Cohen’s) calling because, among other things, it can contain all the other arts.  He thinks like a poet and a musician and an essayist and a painter – simultaneously.”

I have a feeling that I’ll be writing more about Museum Hours in the future, after I view it a few more times, but for now I’ll leave it to A.O. Scott, who describes it well in the Times.