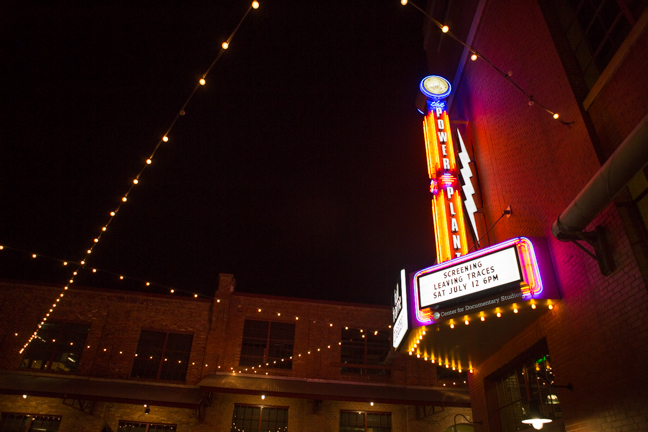 Q&A’s  can be a very fraught experience for me:  The credits end, the lights come up, I’m all ready to talk shop about what I just saw … and within a few minutes somebody is droning on and on and I wish I’d just stayed home.

Yet my desire for a kickass Q&A — where the audience discussion actually takes the work in new directions — is always there. And this was particularly the case on July 12, when Rock Fish Stew screened “Leaving Traces,” a documentary I made as part of the Bull City Summer project.

The film follows a group of artists who created work at the Durham Bulls Athletic Park over the course of the 2013 season. Featured in the film were photographers Alex Harris, Frank Hunter, Kate Joyce, Leah Sobsey, Alec Soth, Hank Willis Thomas, Hiroshi Watanabe, and writer Adam Sobsey. Following the screening was a Q&A with myself, Kate Joyce, Leah Sobsey and project director and Rock Fish Stew partner Sam Stephenson.

A large part of the success of the night was thanks to moderator John Svara, whose gentleness and thoughtfulness set the scene. 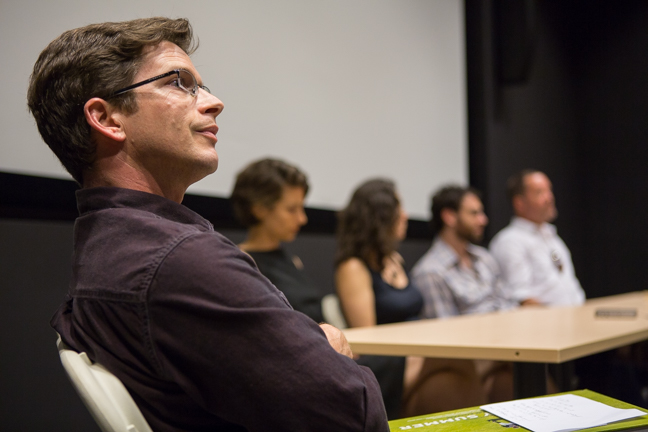 Looking back on the screening a few days later now, I think of the question, Why screen at all? Why exhibit work you’ve spent hundreds of hours creating? The answer seems pretty obvious. That’s why we do it in the first place, right. That’s why we labor and toil and worry. So it gets out there. So people see it.

If I learned anything from making this film and following these artists, it’s that we never just see. Seeing is a process, an act of engagement that continues over long stretches of time. And you never see a thing the same way twice. It’s constantly evolving. As it is with a baseball park, so it is with a film or work of art. At its best, a Q&A draws out different ways of seeing at a particular point in time. It allows you to see a work differently at the end than you did at the beginning.

I hope that happened for people at the July 12th screening. It did for me. Below are some highlights from the night, taken from audio recordings, photos by Alex and Kallyn Boerner, and clips from the film…

John kicks off the Q&A with a provocative question about what the subject of the film really was, which lead me to relive some painful baseball memories: 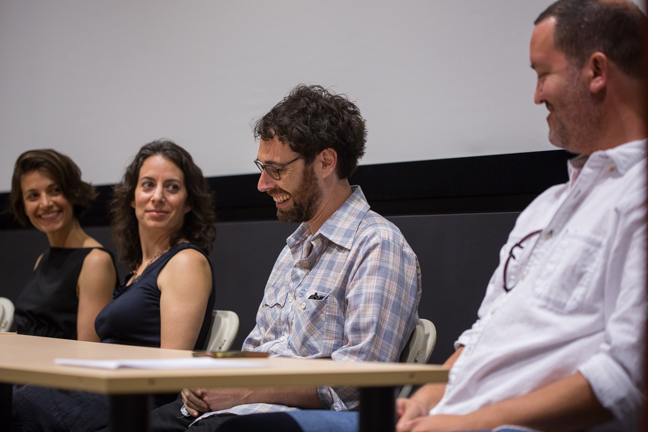 Will I ever get out of that slump?

Durham resident David May speaks about how the film led him to think about his deep connections to the city. He and Leah Sobsey have an exchange: 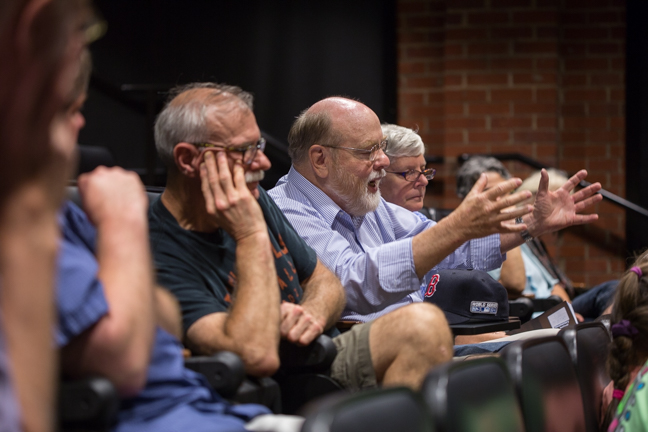 David May asking a question. Next to him is Durham Bulls scoreboard operator Chris Ivy. 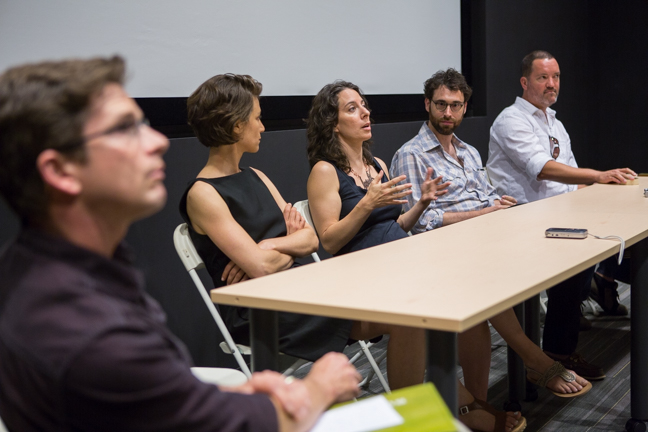 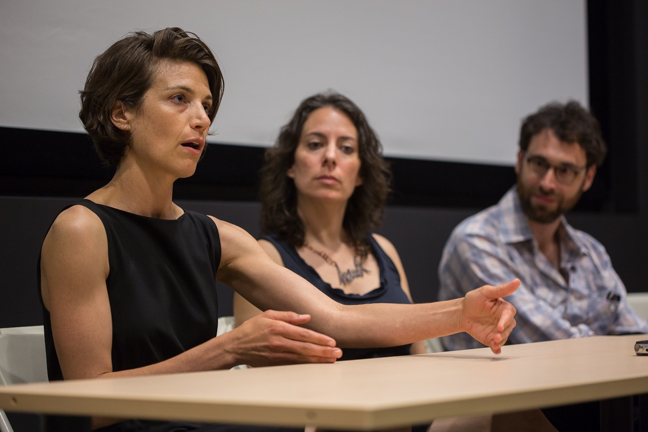 Sam Stephenson offers thoughts about the process of seeing and Bull City Summer: 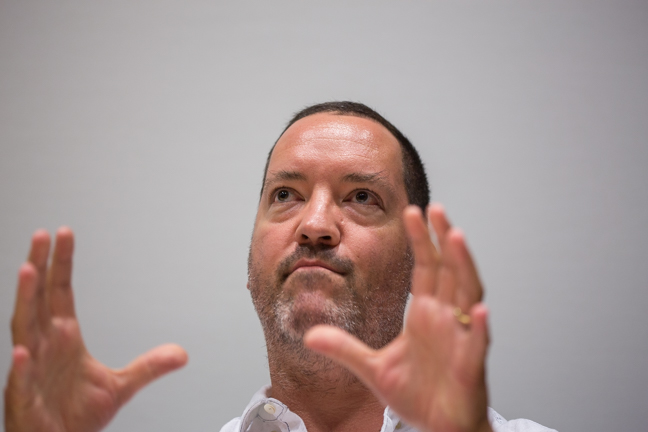 John asks Kate Joyce and Leah Sobsey how they felt being documented for the film: 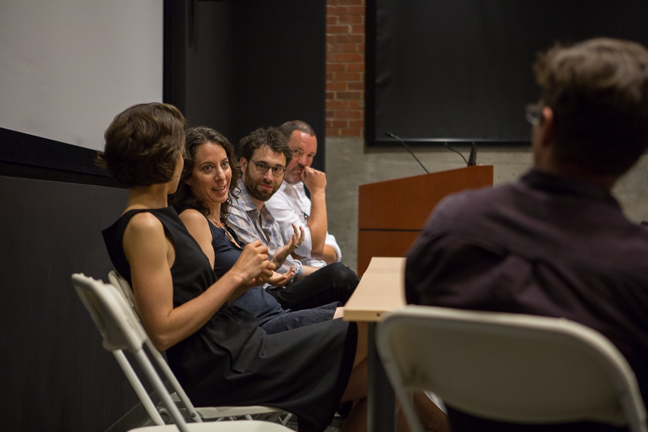 The final question of the night came from Linda Belans, and it was the kind of question I love. Linda offered up a very perceptive observation about the film that I hadn’t realized before, and it led me to see the project in a new light. (Following Linda’s and my exchange is the clip from “Leaving Traces” featuring Kate Joyce and the bird.)

And of course, the end-of-night obligatory high five: 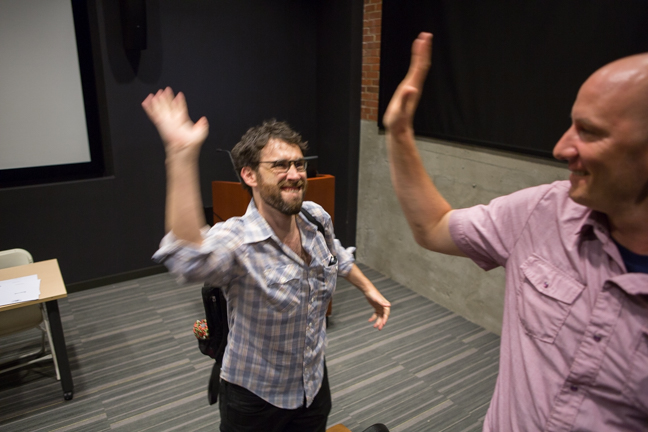